Hello everyone, Sefton Council has been given 1,000 trees by The Mersey Forest to be planted across the borough.
This is a great way to enhance Sefton’s ecosystem and add some canopy to the local area Queen’s Green Canopy and Trees.Next year, 2022, is the Queen’s Platinum Jubilee and there is the Queen’s Green Canopy scheme encouraging people to plant a tree to mark the event. Every tree that is planted can be added to a special interactive map which will be presented to the Queen.

If you are interested in taking a tree to plant in your garden please email thorntonpc.clerk@googlemail.com to express an interest

The trees that are available are rowan, birch and pine. 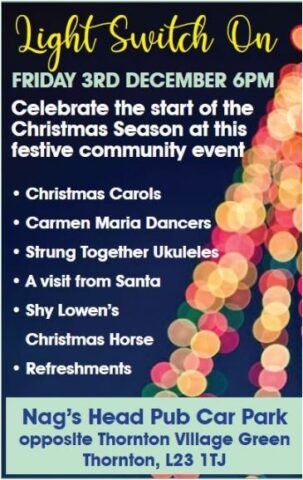 Delighted to announce NWAS Dave Kitchin & Dave McNally to be guest speakers at the next Council meeting on Mon. 2nd Mar. 2020

Among topics: how residents will benefit from a life-saving community defibrillator (AED) to be housed in an adopted telephone kiosk on The Crescent, Thornton.

Merseytravel, as part of its Bus Strategy, is committed to carry out regular bus network reviews across all areas of Merseyside.

The aim of these reviews is to make sure that the bus network across region meets the contemporary needs of the public and adapts to plans for future housing, leisure and employment developments, building on the work done in reviews in previous years.

As part of the Bus Alliance, Merseytravel is working with Arriva, Stagecoach and the other bus operators through these network reviews with the aim of getting more people using the bus by creating a better bus experience.

This includes improved and simpler networks, value-for-money fare structures that are easy to understand and more investment in the buses themselves. Encouraging more people to travel by bus drives investment and means less reliance on the public purse.

Reviews will be carried out on a regular cycle, with an area being reviewed approximately every six months. On average, each area will be reviewed every 2-3 years, ensuring that the network delivers the aspirations of the Liverpool City Region.

Details on the reviews of each district will appear on this page as and when they take place. You will be able to find out details of the changes proposed to the bus network in each region and give your feedback via an online survey.

There will also be the opportunity to attend drop-in sessions to provide feedback and ask any questions, with representatives from Merseytravel and the bus operators available to answer your queries.

If you are unable to attend the events and give your views on the bus services in your area or would like to ask any questions about the reviews, you can contact our comments team through the Merseytravel website by emailing comments@merseytravel.gov.uk or by telephone 0151 330 1000.

Our next Ordinary Meeting will take place on Monday 2nd July at Holy Family School – 7pm start. Please see our documents section for the Agenda.

Between the 15th and the 28th May burglaries or attempted burglaries took place in the following locations:

‘I am pleased to say that South Sefton has been enjoying a lower than normal amount of crime and in particular burglaries and theft from motor vehicles. I was worried with the warm nights that people may leave their windows and doors unlocked which would result in a rise in these type of crimes. I am happy to say that we have only had a handful of burglaries where windows and doors have been left insecure so hopefully this trend will continue.

My team have conducted a further 15 warrants in the last 2 weeks with drugs located in a number of them leading to significant arrests. This hopefully shows that we are acting on your information and also disrupts those who are trying to ruin our communities.’

+252 problem has arrived in the North West

The police in Sweden have received over 10,000 reports about the +252 telephone number. A similar problem has appeared in the US where it was known as the ’One Ring Scam’.

The Swedish Police suspect it is an attempt at fraud. Residents who were targeted say they received missed calls during the middle of the night and when they called back they were connected to answering machines and hold music, apparently designed to keep them on a premium rate line as long as possible. The public were warned to avoid answering calls from unknown foreign numbers and have urged scepticism if called unexpectedly from abroad after an apparent telephone scammer from Somalia targeted Swedish phones. While answering a call from abroad does not cost extra, outgoing calls to the number does.

On 2th May 2018 a resident in West Lancashire bordering the Merseyside area received a very short call on his mobile during the night. The following morning, when he found the missed call on his phone starting with +252, he put the full number into Google and it came up with a warning message advising people not to reply and giving the reasons as above.

Sweden and the US may be a long way from Merseyside but now the problem has appeared too near for us to ignore.

Between 1st and the 14th May burglaries have taken place in the following locations:

The last message was a Police Press Release warning of a scam via a telephone call from fraudsters claiming to be the Police, stating that the recipient of the call was part of an investigation into suspected staff procedures within their bank and their money was at risk. Unfortunately another Sefton resident has fallen a victim to this crime and lost an amount of money. Please warn neighbours, relatives and friends who may not be aware of this fraud.

On April 14th a small white Peugeot van part registration number NV 57— with ladders on the roof, was seen being driven very slowly in Holmwood Gardens, Holmwood Close, Beech Drive and Weld Drive Formby and returned for a second time to Holmwood Gardens.

A resident spoke to the men in the vehicle and asked if he could help them. They told him they were looking for a house in Roache Road, they had rung the occupier but received no answer. There is no Roache Road in Formby. They gave the resident a card with the roofing firm where they ‘allegedly’ worked. Please contact the Police if you are suspicious of any such vehicle in your area of Sefton

News from your Community Policing Team. A message from Inspector Ian Jones.

‘Once again it has been a busy week for my team. We have organised and conducted another operation day 10/05/18 executing 12 warrants at addresses across South Sefton. This was targeting those individuals that you are reporting to us for drug dealing and being involved in gangs. We recovered drugs and cash and made 10 arrests for numerous offences. This shows that by working together we can make a difference and stop these people from ruining our communities.

Since my last update we have had no major issues in our area and no patterns in any one crime.

As the nights get lighter and weather gets warmer, can I please just ask that we continue to be conscious of our home security by closing windows and doors when we are in bed or away from the house. Last year we had a number of burglaries with the occupants watching TV in the front of the house but leaving the rear door open or unlocked. Entry was gained and kitchens and rear rooms searched for car keys and valuables. Let’s try and prevent this happening this year.

The Community Police Station has been open for a few months now with a ‘Drop in’ event every Monday between 14:00 and 1600. There have not been many visitors over this period so I ask for people to drop along and say hello to the team.

Between 31st March and the12th April thefts from vehicles have occurred in the following locations:

Items left in and then stolen from the vehicle 12

It is suggested that items should be placed in the boot BEFORE and not WHEN the car is parked and left unattended.

In a car park sometimes a thief will watch for a car owner to place items such as laptops, handbags and cameras in the boot and then target the car for the valuable items when the owner has left the vehicle.

A Sefton Resident received a call from someone saying he was from BT Openreach. The caller spoke with a foreign accent. He stated that a named man from New Jersey was trying to hack into the resident’s account and requested that he should go on his computer immediately to view his account.

The resident was suspicious and asked the caller for his telephone number and he would call back. The caller gave a number but when the recipient dialled 1471 the call had come from a different number. Action Fraud and BT Openreach were informed.

Over the last week some of our communities and my team have met some challenging and disturbing events. These have centred around mindless individuals firing guns at rival youths. One of these incidents occurred in a busy residential street when children were playing. As a result my team have been working tirelessly leaving no stone unturned to build bridges with the communities involved whilst ensuring those responsible are brought to justice. We have acted upon community intelligence and executed a number of warrants with drugs being seized and people arrested, however my main ambition which I am sure is shared with yourselves is to remove the firearms from our streets and remove those using them from our community. In order to do this we need your help!! If you have any information at all, please let us know. You can remain anonymous and I can assure you that ALL information will be investigated and acted upon.

Can I also remind you that if you wish to speak to a member of my team you can call in at Marsh Lane Police station or come and see us at Maghull Community Police Station (situated just next to the Maghull Town Hall entrance) on a Monday between 2pm & 4pm. I have also managed to secure a shop on Kirkstone Road North for the next two weeks were we will be joined by a member of staff from One Vision Housing, the Sefton council ASB team and a local Councillor. This will be every Monday and Thursday between 12 and 2pm. As such we will be answer the majority of your queries.