In accordance with the provisions of

In doing so, we ask Sefton MB Council to consider recommending the alteration, by extension, of the existing Thornton Parish Council boundary, to more accurately and better reflect the true geography of the parish and its long established and growing community: in doing so to harness residents’ collective pride and responsibility for its appearance and upkeep and to engender a positive identity within our neighbourhood.

The current boundary and our proposed extension are described below and form part of this petition.

Manor E Ward, polling area N5. The boundary’s northern edge follows Hunts Brook, through Homer Green, across the A565 and north of the perimeter of St Joseph’s Hospice. It continues, running at the side of Back Lane and south, across an unnamed watercourse to the edge of The Northern Club’s grounds. It then takes a south easterly course to Moor Place Tennis Club’s south perimeter and on to Moor Lane.

The boundary then turns a little up Moor Lane before it turns right, along part of Edgemoor Drive * and left on to Ronaldsway, to its junction with Edge Lane, it turns right and runs in a south easterly direction. The boundary turns left on to Stanneyfield Drive and takes a course across the back of the Lydiate Park estate on to Westbourne Ave, turning right on to Lydiate Lane and left after the Crematorium cemetery.

It follows the cemetery perimeter over Brooms Cross Rd, continuing on to Langdale Lane, Lunt Rd, right on to Moor Lane, across Harrison’s Brook and it probably continues along Moor Lane to its conjunction with the River Alt.
From that point it likely turns in a north westerly direction and follows the river to meet Hunts Brook, to complete the current PC Boundary.

A number of long established businesses etc. refer to themselves as being “Thornton” based, even though they are actually outside the current PC boundary, including:-

Many people, living in homes locally consider themselves to be Thornton residents and we identify with Thornton, as being where we live.

In addition, the new housing developments at Pleasant Hill Close and Sundial Place (and the land on Lydiate Lane, which until recently was proposed for development, as Rakes Park) are also described as being located in Thornton. Other new proposed Thornton developments that we are aware of to the north of the Parish (whether they are successful or not) are already within the current boundary.

In order to fix this, resulting in a Parish with a boundary which truly wraps itself around our recognised community in the 21st century, such boundary to include both defined natural geographical elements together with developed and proposed dwellings, businesses’ sites, paths, roads etc. we would suggest an extension to the Parish as follows:-

By reference to the above description the boundary would remain as before, to the point where it runs along Edgemoor Drive… noted with an * above…

From here, we propose it should continue along the length of Edgemoor Drive (taking in houses on both sides) to its end and all of Edgemoor Close (Cul de Sac), currently within Manor Ward, N4 then cross over on to Drummond Rd and incorporate the premises known as LCFA and also Edge Farm, beyond. The boundary would thus be routed beyond the farm’s south easterly edge, along the path known as Trawden Way, to Edge Lane, to include the two dwellings at 1 and 2 New Cottages, Edge Lane, which have an L23 1TS postcode. This route takes in a corner of St Oswalds Ward and continues into Manor Ward N6.

From Edge Lane, at the junction and turning left onto Buckley Hill Lane, B5422, we find the Shy Lowen Horse Sanctuary and Buckley Hill Playing Fields so to incorporate them within the parish, the proposed boundary should thus run along Buckley Hill Lane, across Lydiate Lane, B5207 and continue up to Brooms Cross Rd, A5758, where it would turn left along that road and continue until it meets up again with the current boundary, at the end of the Cemetery grounds. Again, this area is currently within Manor Ward, N6.

Thornton Manor Ward, civic parishes and the polling areas mentioned can be seen in the map below or you can use the link at https://www.ordnancesurvey.co.uk/election-maps/gb/

It should be noted that although Sefton has ten parish councils, two other areas relevant here (neighbouring Crosby and Netherton) are not parished and so don’t currently attract a parish precept.

Some properties, which fall within our proposed new parish boundary are currently in Sefton & Lunt Parish. However for the majority, of properties that we propose be included, there would be a new contribution (precept) shown in their council tax demands.

The extension to the boundary is shown by a broken dark blue line. Thank you. 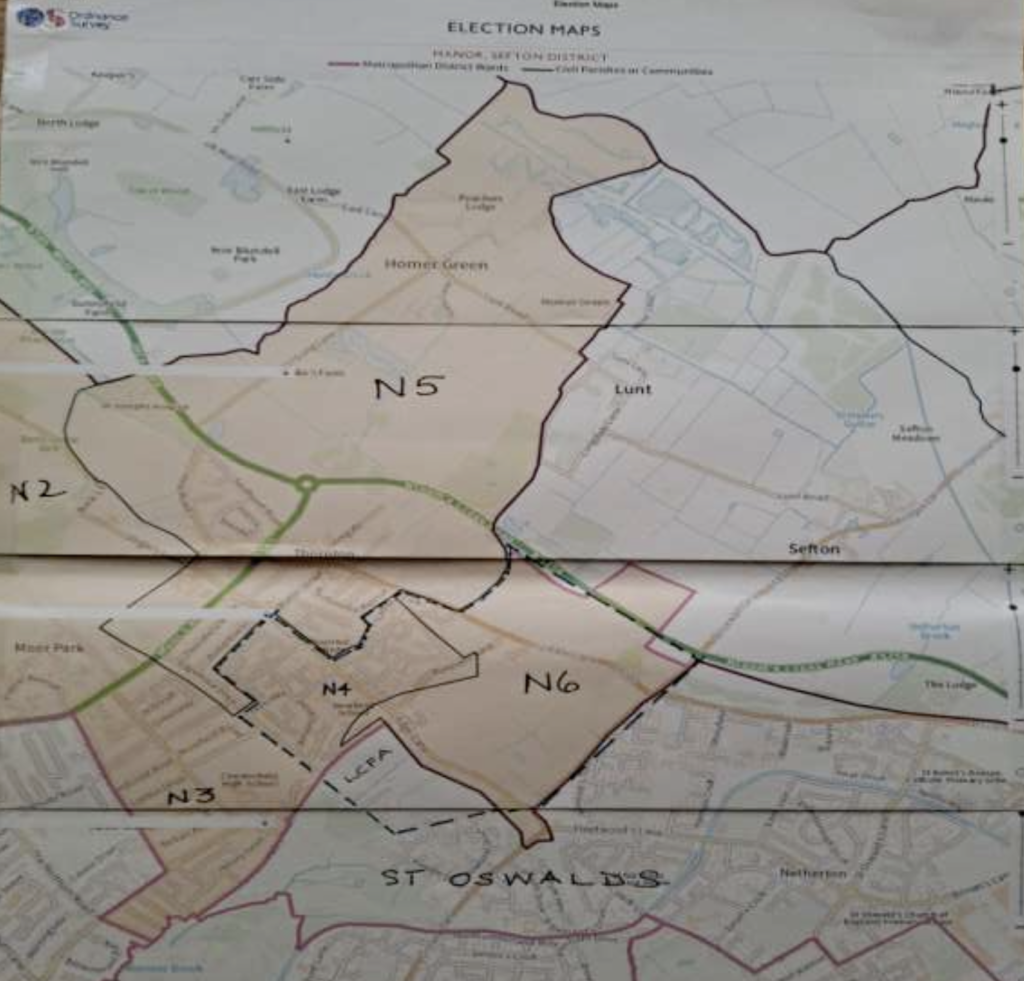